Due to the severe drought during the summer of 2015, food prices have again risen and the cost of heating (wood/coal) as well. As in past years, LSM has provided for those in dire need of food and heating resources during the winter months, beginning with late October through April. 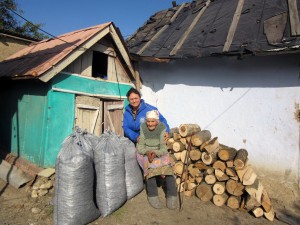 Due to the severe drought during the summer of 2015, food prices have again risen and the cost of heating (wood/coal) as well.   As in past years, LSM has provided for those in dire need of food and heating resources during the winter months, beginning with late October through April.  Below are just a few of the feedback stories from those who have benefited from the Food and Coal and Wood project for Winter 2015-2016.  A special THANK YOU to all those who have specifically contributed to this project.

Mrs. Eugenia is 80 years old and up until this summer she has worked hard in the field. This year, however, she stopped working due to her health condition, moreover, the drought that the whole country experienced, didn’t allow her to get the usual carrots, potatoes, onion that would grow in her garden. Just as she was thinking about how she will survive this winter, we entered the gate with big bags of carrots, potatoes, onion and other food items. When we said that we come from the Little Samaritan Mission she said: “Oh yes, I know all about you, I know of the Radio LSM”. We told her that God loves her and knows her needs, that is why He sent us to bring her all these goods. She was overwhelmed and very surprised and exclaimed: “all this is just for me”? Tears streamed down her face and in the end she said: “I have no money to give you”. Of course we told her that she doesn’t have to give us any money and the poor lady started crying even harder, saying that no one has ever done anything like that for her. Emotions, tears and joy were coming out of a sincere and grateful heart.

Mr. Tudor is used to living in hardship and suffering ever since he was a child. He is an orphan, so it was very hard for him to get by since he was little. He inherited an old house, but it is in a terrible condition. He could not make any renovations to it, because he was doing daily labor in the village that could hardly cover basic expenses. Unfortunately, another tragedy came in his life as he suffered a hip trauma that kept him bedridden for three months. This forced him to borrow money for the surgery. Mr. Tudor said that that he would be bedridden in the house and no one would come to check on him. He was very happy that the Little Samaritan Mission staff came to see him: “You came into my house in the hardest moments of my life. It is difficult for me to get by, physically and mentally. You’ve brought me food, but also a ray of hope that there are kind hearted people on this earth still. Thank you from the bottom of my heart for showing mercy towards me.”

Mrs. Veronica has 1st degree disability since childhood. She cannot talk due to her mental retardation. She inherited an old house from her parents, but it is in a deplorable condition. Even though she is 50 years old, she is not socially adapted, has no family, has never been married and cannot care for herself or the house she lives in. Sometimes she gets to do daily labor around the village. However, due to this year’s drought, her income has basically disappeared. Her pension is quite small and is hardly enough for food and medication. The village school director helps her sometimes and does her laundry and helps to feed her.
When she saw LSM staff arrive with food, clothing, and blankets she cried tears of joy and even though she could not express her gratitude in words, her gestures (raising her hands to the sky) and her tears said more than any words could ever tell.

We found Svetlana’s family in dire poverty. The single mother raises her three children without any income, since she does not have a job. Her husband abandoned them. She does daily labor around the village whenever possible, but that is hardly enough to provide sufficient food for her children. Her eldest daughter became pregnant and the father refused to provide any care for his child. Pain and heartbreak are constantly in Svetlana’s life. The house they live in is about to collapse. It is an old house where the ceiling is cracked and shifting, and about to fall. They all live in one room. From all these worries, her health condition has deteriorated and she needs medication and better nutrition, which she can’t afford. It was a great joy for her and the children to see us enter their house with big bags of food. The help we brought represents a great relief for the family and we are sure that at least for a while Svetlana will go to bed peaceful, not worrying about what she will feed her children the next day.

We entered Vitali’s house overwhelmed by the poverty we encountered. We found him alone, as if forgotten by the rest of the world. He is bedridden and sometimes his sister comes and takes care of him. From what we understood, she is ill as well and cannot care for him regularly. We arrived at the same time with her, she was carrying a bucket of water. Teary eyed, they welcomed us surprised that we came to bring them food. They could not believe that someone would just come and help them without expecting anything in return. We told them that God sent the Little Samaritan Mission to help them. They thanked us and said they will pray to God to keep us safe and in good health.

Mrs. Liuba is 85 years old and lives in Costesti, not too far from the orphanage. She is on her own, has no relatives or children. Her house is old and cold and her pension is too small to provide for her basic needs. She has trouble moving and can hardly walk. When we came in the house we noticed there was no food on the table or anywhere in the kitchen. We asked her when was the last time someone came around to bring her some food and she answered she doesn’t remember exactly, but some time ago her neighbor brought her a few tomatoes. It was dark and cold in the house. We gave her a warm blanket, as well as a food package, which should last her a while. She was the happiest when we gave her the Little Samaritan radio, since it will help her through the long nights. She thanked us for taking the time to visit and for all the help.