CONSTRUCTION AND REMODELING PROJECTS IN ORPHANAGES AND SCHOOLS

Since 1991 when LSM first began working in Moldova with children in state institutions, it was evident that many of the facilities were in dire need of updating and modernization. 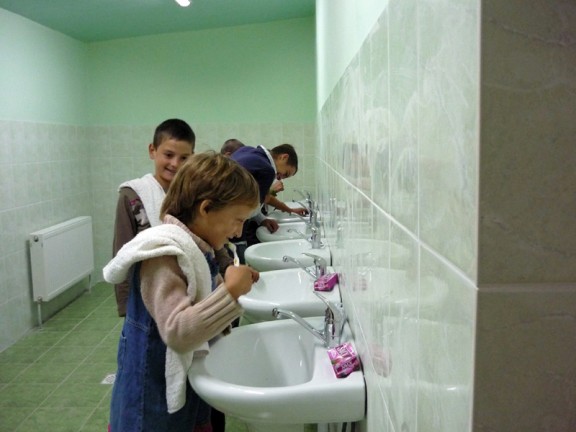 Since 1991 when LSM first began working in Moldova with children in state institutions, it was evident that many of the facilities were in dire need of updating and modernization.  During the Soviet Era, construction was done on a massive scale but after 1991, it was impossible to maintain the facilities or to heat them properly.  Heating systems were inefficient, indoor plumbing systems for bathrooms were either non-existent or had not been functioning properly for years.  Dormitory areas were inadequately heated during the winter and without hot water in bathrooms or shower and bathroom facilities indoors, many children were constantly sick and certain conditions turned chronic over the years.  In some of these institutions the roofs had not been replaced for many years and were leaking making entire areas of the building unusable.

LSM has completed many remodeling and modernizing projects throughout government institutions in Moldova such as: building plumbing and heating systems, roof replacement, installation of hot water heaters, modernizing kitchens with new and efficient stoves and equipment, building and equipping indoor laundry rooms, windows/doors replacements, mattress replacement projects, building indoor bathroom facilities, etc.  At Badiceni (an institution for the mentally and physically handicapped there were 10 inefficient and nonfunctioning coal burning furnaces.  LSM, repaired 2 of them and upgraded the system so that there would be adequate heating during the winter months. At Drochia (state orphanage/institution), LSM installed a gas line as an alternative source of heating since until that point, they were entirely dependent on coal.

‍
The impact of such a project is tremendous because when basic living conditions are improved for children, they become healthier and more well adjusted living in government institutions.  Their learning capacities in school are also increased since they are less likely to be sick and in a state of physical discomfort. Feedback from the doctors, nurses, and caretakers on staff at these facilities proves the direct impact these projects can have in the daily lives of the children residing in these improved and updated facilities.